The Earth is billions of years old. Over the long period of Earth's existence there have been many climatic shifts ranging from a constantly volcanic planet to numerous ice ages. Believe it or not the Earth has been through much worse than the current climate we have now. But why is it still a worry. How does human-influence change the grand scheme of things?
A Brief History of Ancient Earth's Climate:
Present-day Earth is experiencing more extreme climatic shifts than ever before. However, in the grand scheme of things there have been multiple climate extremes. From temperatures as hot as Venus to even a "snowball" Earth, our planet has experienced a lot.

The Earth's varying climates can be traced all the way back to its formation, a result of a collision between two planets. When the Earth was formed the surface was just molten lava. Scientists estimate that the planet was around 2,300 Kelvin - 3,680 degrees Fahrenheit (NOAA Climate.gov). This temperature was inhospitable to all living creatures. Although there was a constant amount of heat being lost to space, how did life come about on Earth?

The loss of heat overtime led to the formation of molecules under the hydrogen blanket that covered Earth. The appearance of cyanobacteria - about 2.4 million years ago - set the stage for the formation of life. These cyanobacteria photosynthesized; they used the available water on the planet to make food and released oxygen at an exponentially growing rate. This sudden boom of oxygen into the atmosphere was known as the "Great Oxidation Event".

This "great oxidation" of oxygen eventually died down. However, this sudden growth in cyanobacteria was the catalyst for a new life forms: multicellular organisms.

Multicellular organisms are known as this because of their many cells. Each cell is contained organelles, also individual living units (National Museum of Natural History). The endosymbiotic theory hypothesized that the organelle mitochondria became engulfed by a eukaryotic host cell contributing to multicellular life (ScienceDirect).

Earth continued to become more and more hospitable to everyday life. The ample oxygen levels in the atmosphere and the development of multicellular organisms contributed to the formation of the first animals around 800 million years ago. By 580 million years ago, known as the Ediacaran Period, there was a growth in the diversity of animals - both on land and in the oceans. Around 541 million years ago was one of the first major extinction events: The End- Edicaran Extinction. Environmental change led to the significant deterioration for some animals and improvement for others (National Museum of Natural History).

While extinctions may seem problematic to Earth's living ecosystems, they have been important in contributing to the diversity of life we have today. The End-Edicaran Extinction contributed to the formation of new animals. In fact the new animals that emerged shortly after this time period were so diverse that the period was called the Cambrian Explosion (National Museum of Natural History).

But how exactly have the Earth's environmental trends been documented over this much time? Different types of proxies can document these climatic changes over time. Proxy data are preserved physical characteristics of the environment that can stand in for direct measurements (NOAA). 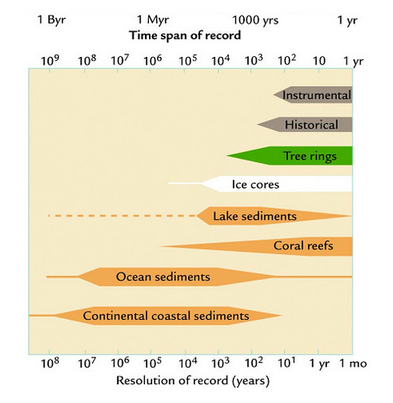 The primary proxies, as can be seen my the chart above, used for ancient environmental changes have been sediments. Knowledge for the precambrian period and the advent of multicellular life have been documented through imprints or changes in proxies. For more recent environmental data tree rings, ice cores, and even instrumental records can be used to have an inference about past climates. Other types of proxies are also used including diatoms and even pollen grains. Proxies are critical to understanding the past climate of the Earth and has allowed us to document Earth's turbulent history.
Historic Climate Shifts
Studies done by paleontologists and analysis of proxies have allowed humans to understand the many changes Earth has undergone. Unprecedented changes in temperature, composition, and life on Earth are just some of these shifts. The Paleoeocone Thermal Maximum (PETM) was one the first, extremely rapid shifts in Earth's climate. Only over a period of 10,000 years, it impacted the existing biodiversity greatly. The change in temperature can be seen on the graph below. 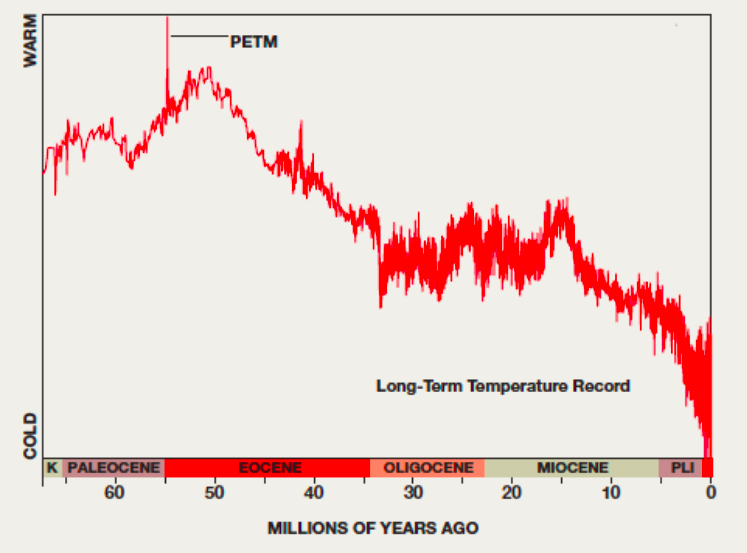 However, this thermal maximum still occurred over a period of 10,000 years - modern humans have also only been around for around 10,000 years. The exact causes of the PETM cannot be pinpointed. Potential causes include gas hydrates in marine sedimentary rocks, permafrost melt releasing methane, and even volcanic activity. Still, much of the modern anthropogenic climate climate has started from the Industrial Revolution - in the 18th and 19th centuries. Human potential to contribute to climate change is unprecedented and at a geologic scale, our impacts on the climate are much greater than any natural cause.

Events such as the PETM led to the extinction of certain species and the rise to new species. A better known extinction event includes the Cretaceous-Paleogene extinction event, the extinction of the dinosaurs. This happened about 66 million years ago when a asteroid collided with the Earth sending ash and other debris into the atmosphere (NPS.gov). The Cretaceous-Paleogene extinction event was sudden, occurred over days, leading to about 75 percent of all species going extinct.
Snowball Earth
Although proxies and other scientific tools have been used to clear up misconceptions on the past history of Earth, there are still many uncertainties. Scientific data has shown multiple trends - from scorching hot climates to ice ages - that have temporarily characterized Earth's climate. A major hypothesis that has been agreed on by multiple scientists is that of snowball Earth. This hypothesis proposes that during one of the world's ice periods, the planet's surface was almost completely frozen. But how exactly did this hypothesis come about? Scientists predict that this phenomenon occurred because of ice-albedo feedback loops. The hypothesis involved that as the amount of sunlight reaching the Earth decreased, the ice expanded from the poles to the equator. Ice has a higher reflectivity and as a result the hypothesis presumed that this feedback loop eventually led to a nearly entirely frozen Earth.